It has recently come to my attention that, where it can be checked (cutscenes are usually the same everywhere after all and popular games have a million Let's Plays to hide in), a substantial amount of Feminist Frequency's video game footage isn't actually stuff she recorded herself. She's already just pretty much reading Tvtropes pages and Wikipedia summaries, but the game footage doesn't even come from her own camp and she doesn't cite her resources?


There's of course a disclaimer at the end of her video to declare all the footage as fair use, but it's still bad form to hide the fact that a lot of her footage is ripped straight from YouTube in, as MovieBob calls it, an "academic presentation", especially with the money she raised for the project and the amount of time it took to even release her first video.


Information in the individual images should be enough to find the original video and the timestamp at which I screencapped them. Look for things such as the score counter, health bar or items the player character is holding. Some of these examples have been provided by Barfman over at MovieBob's blog at http://gameoverthinker.blogspot.ca/2013/03/overbytes-on-tropes-vs-women.html.

Note: the original comments on MovieBob's blog seem to have disappeared (which may be an honest error with his comment system). Screencap backup here courtesy of Jyagos: https://imageshack.com/a/JFQb/1

Anyway, make up your own mind about this. I'm just here to present the facts.


I have been in contact with some of the channels hosting these Let's Plays and I have been informed she didn't ask for their permission or were made aware at all. Here's what I got back from cubex55, the channel hosting the vast majority of Longplays Anita used: 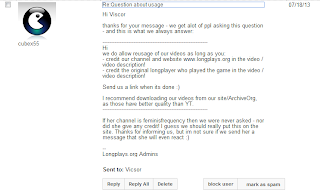 Damsel in Distress Parts 1 to 3

(I fully accept that this one is questionable. I include it because the position the characters are in does vary depending on where you beat the boss and it also comes from cubex55 like most of the other examples listed here)

(The weapon gave it away, all the other Let's Players used a machinegun-like contraption)

The following footage was taken from trailer footage, and as such might not have strictly come from the source I found. I merely include these for the sake of completion and because they weren't obviously trailers (to me, at least).

Ms. Male Character
(Which clearly should have been titled Ms. Adjective-Man >:C )

Even your fanart isn't safe 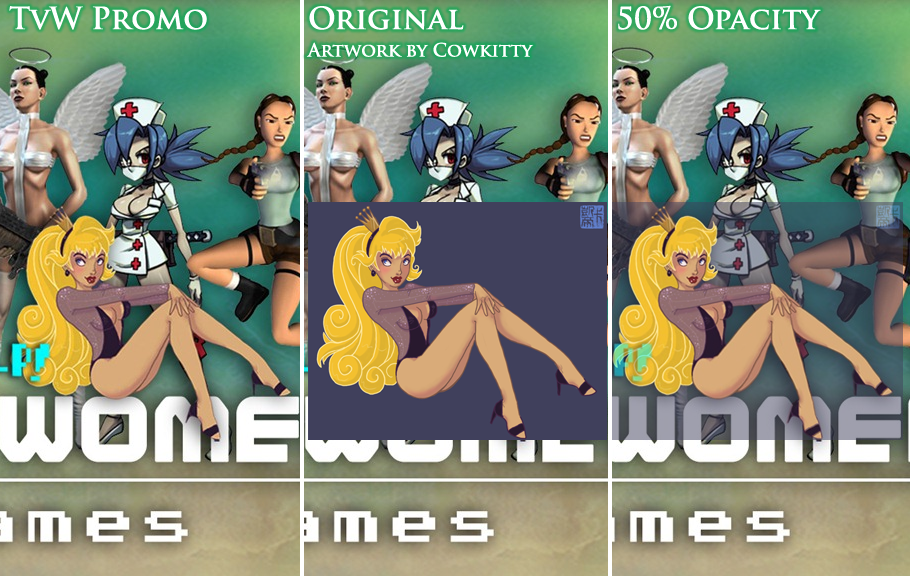 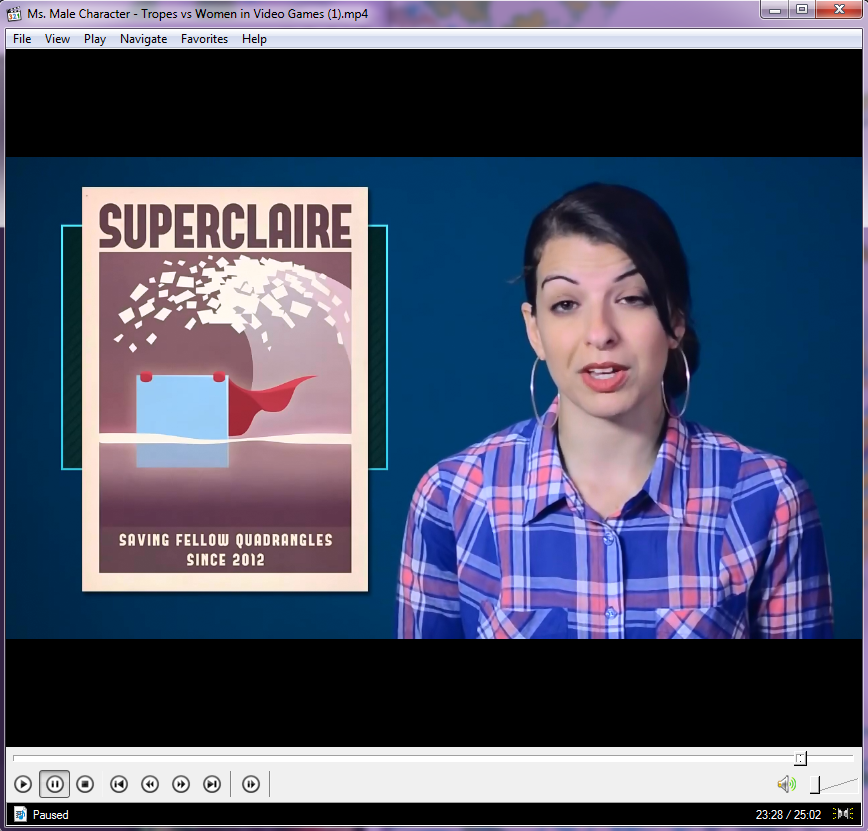 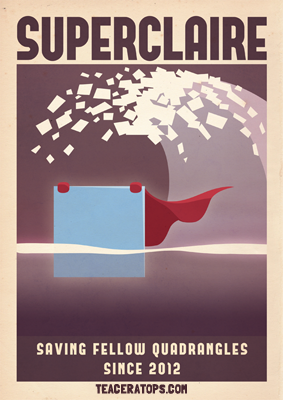 I also talked to the original artist of the poster used in the Ms. Male Character video and received an e-mail asking me to include this statement:

"Although Anita did not ask permission to use the image, and she refused to remove it quoting 'Fair usage', we did eventually come to a compromise that she would credit and link back to my website in the video description, which she did do.

However, in UK (my home country) law, 'Fair Usage' is not applicable, and instead we have this - http://pages.citebite.com/a2e3m4d8p2jxh
...which basically states that you must ask the creators permission, if you cannot find any rules on usage on the page you have found it, and if you are making and distribution copies of the work - she is distributing media that contains my work, which as I understand, will be available on DVD.

I do not want to attack Anita directly, I just want her, and every other person out there, to contact an artist, ask permission and credit them as per the artist's wishes. We work hard on our work, it would be nice to get a little appreciation for it."

"Half of those screens are from cutscenes"

That's why I specifically mentioned to pay attention to score, life and weapons the character might be holding. Yes, the scene from Violent Storm is a cutscene, but how likely is it that both the Let's Player and Anita got a life count of 0 and a score of exactly 2492500 by that point?

"The screens don't match up exactly"

You people realize that Anita uses video footage and not screenshots, right? Which means that for a single comparison I have to line up both videos as closely as possible, which is incredibly hard to do. I also clearly provide timestamp and location of the source video so you can go check it out yourself.

"I can't believe someone took 1000's of hours to research this"

More like, I happened to see the comment on Moviebob's blog, checked out the claims and decided to look a bit further into it and provided screenshots to have a clear reference. All of this took me, at most, 4 to 5 hours. You think I actually sat down to watch every Let's Play of a game just to find a single scene? Learn to search more efficiently. The majority came from the same channel anyway, it's not that hard to figure out where to start looking.

"This is a derailment tactic"

No, it's a simple clarification on her sources as people were arguing about this anyway (doesn't that mean I stopped derailment?). Furthermore a proper sourcing on her part would ensure people can easily check Anita's claims for themselves without having to spend a fortune tracking down all of the games mentioned, which in turn would help to keep her honest, as we know she alters footage or leaves out context if it helps her narrative.
It's also something her backers should be made aware of for the sake of transparency, even if they don't care she used Let's Plays.

"This doesn't mean she isn't a gamer!"
I also did not use this as evidence that she isn't a gamer or that she hasn't played any of the games pictured, at most I point out a couple instances where her lack of knowledge illustrates which games she clearly hasn't played extensively. If someone else makes this argument based on the evidence I provided, go take it up with them.

Much appreciation to Mundane Matt for making a video about this post.


- Jordanowen42: Anita Sarkeesian Found to be Ripping off Gameplay Footage... and the money was for WHAT exactly?
- Sgt Schultz Brigade: Anita Sarkeesian tropes vs women Did not play the videogames she showed proof
- MrMagicalToast: Anita Sarkeesian stole videos
- TheBadcop69: Anita Sarkeesian,Her sources,Integruity and Work ethic (or lack there of)
- Christopher Were - Re:Damsel in Distress, Tropes vs Women

(Seriously, if you have a negative reaction to this I'd also put it here, unless unnecessarily uncivil)

And since I have your attention, I'm going to plug The Gaming Goose's excellent response to Damsels in Distress.

Confessions of a Conjuror
by Derren Brown
Proof that the witch on the telly is just as much a regular weirdo as the rest of us (or at least that's what he wants us to think). It was alright, but the charm of its format sometimes also made it at times rather boring and disappoin...

W.I.T.C.H., Part I. The Twelve Portals, Vol. 1
by Elisabetta Gnone
Rereading this series 12 years after I first did, and somehow I love it even more than I used to. The artwork is gorgeous, the characters are all relatable individuals and the story has that 90's charm of being an emotionally-charged ma...

Throne of Glass
by Sarah J. Maas
I can’t honestly say that I disliked Throne of Glass, but neither can I say that it was good. There’s the potential of a good story in here but as it is little gets done with its premise and its characters aren’t all that well developed ...

The MEG
by Steve Alten